A journey in to Musicscape -8

“Simhanandanam” is the Simham  (Lion) of all the ThALams. I have tried to find true the meaning of this word and found no reference to the reason or root of this word. Sanskrit root word “nandan” means joy or beauty. So the word must mean the beauty of Simha, or the joy of Simha!  Simha symbolically stands for the majesty, strength, agility, power etc,. Don’t we equate the powerful authorities as Simha or Kesari etc? In this sequence, we are about to see how the Simham that  MAHA Vaidhyanatha Iyer was, demonstrated his prowess of handling the complex and majestic thALam “Simhanandanam”.

Being the most difficult with most number of aksharas (128) this thALam must probably be called “The Beauty of Simha” or “The Joy of Simha”. Out of the 6 parts (Shadaangas)) of a ThaLA, viz., Lagu, Drutham, Anudrutham, Guru, Plutham and KAkapAdam, it has all other parts, except the Anudrutham. The figure below gives the parts of the thALA in 4 equal counts of 32 Aksharas (makes it easy to remember, of course after some memorizing)

8 stands for Guru; 8 with a line over is Plutham; and + stands for KAkapAdam; Vertical is only too well known Lagu and O stands for Drutham.

Once MAHA Vaidhyanatha Iyer had to stay for many months in Chennai. Many musicians in and around Chennai would visit him at the place where he was staying to discuss several music related topics and sometimes to clear their doubts. Since MAHA was an acknowledge authority on anything pertinent to our music. They wanted him to demonstrate Simhanandana thALAm. Their thought and desire was expressed through the great Vidwan “Pallavi” Seshayyar who had also visited him, during one of the evening congregation of musicians.

Without any hesitation, and with no accompaniments there to support, and with the help of a just a Thambura shruthi,  he immediately fulfilled their wish. He chose to sing KalyANi rAga elaborately and instantly created a Pallavi in the thALam. After a detailed Alapana, he sang the following Pallavi lines. His neraval, and thrikAlA were all impeccable and none felt the lack of accompaniments. His voice and all engaging singing captivated the musicians gathering and left them spellbound.

Though musicians of those days, had their own practice and opinions on the “appearing order” of the angAs of the meter, everyone seemed to appreciate the clarity of how MAHA handled and readily accepted his way as the most logical and correct one.  Even today, we can see some different ways of doing these angAs of whenever a musician chooses to use one of the 108 thALams or other Anga thALam..

The most important part of his demonstration was how he handled the angAs,  Guru, Plutham and KAkapAdam!.

Among the nishabda kriyas, Guru has 8 aksharAs; In Oru kaLai chowkam it has 16 mAtrAs; Likewise in 2 kaLai chowkam, 32 mAtrAs, and 3 kaLai chowkam, 64 mAtrAs etc… The symbol has two zeros (sunnam) one over other. Gurus symbol is sunnam, denoting worship-worthy Shivalinga (Dakshinamurthi). A worthy disciple of a Guru would also essentially, eventually attain the status of a Guru. So the symbol signifies the two zeros one above other, the top one being the Guru and the bottom one being the disciple – who is also a Guru’s form. The mudrA for a guru is “ChinmudrA”, done by holding the thumb and index fingers together, with other 3 fingers held vertically straight, denoting “wholesome consciousness”. Just as a Guru would hold his right hand in ChinmuDrA, the hand would be waved to left side and held for 4 akshara kAlA and waved to the right side with another 4 akshara kAlA, as the Guru would address the disciples.

For the next anga Plutham, though the current symbol is as indicated above, with a 8 and a vertical line over it, MAHA would denote it as a bow and arrow ready to fire as in the figure below. Just as in Guru, in 1 kaLai chowkam this would have 24 mAtrAs, 2 kaLai chowkam, 48 mAtrAs and in 4 kaLai chowkam 96 mAtrAs 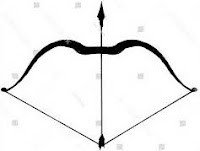 This is simply executed with holding 4 fingers folded inside, and keeping the thumb vertically upright (as if we show victory symbol!) and show the action of pressing downwards in 3 places like the letter “ஃ” in Tamil, each press counting for 4 aksharAs

The next anga kAkapAdam (crow’s feet) is the longest of angas with 16 aksharAs. The symbol is “+” symbol, just as how a bird’s feet would be. Here again, 1 kaLai chowkam will have 32 mAtrAs, 64 for 2 kaLai and 128 for 4 kaLai chowka. To do this angA, the following is done: with thumb of right hand vertically and with all other 4 finger open and together,  moving left for 4 aksharas and moving right for 4 aksharas, showing the palm downwards for 4 aksharas and then lifting the palm to vertically up as in abhaya hastam for 4 aksharas, completes this angA. Now the whole pallavi is given below in Tamil. Those of you who are interested can try this and sing..

When MAHA completed this, the entire congregation was ecstatic and was very appreciative of MAHA Vaidhyanatha Sivan’s command in the thALAm and how he did it with so much conviction, confidence and concentration. Looks like he sang the same, in different occasion in the rAga “kAnaDA”…

Now,  more information on the same subject will be discussed further on, in the next part of this series.. 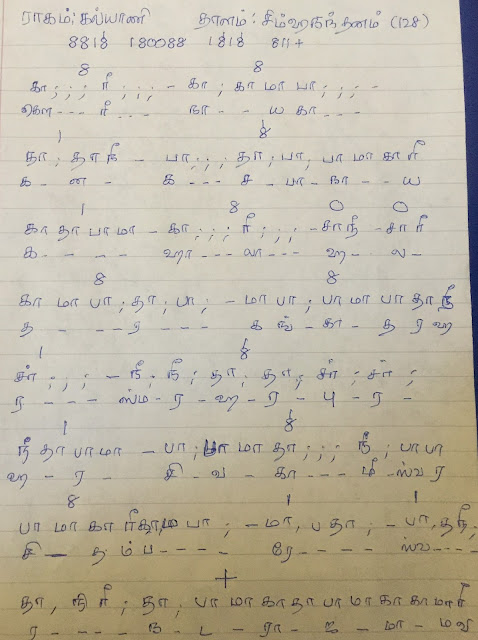 As much as I enjoy writing on various topics, you have right to comment, critique, vehemently disagree or share your happiness reading it. So, please let me know your thoughts